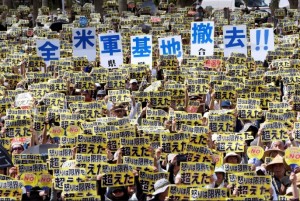 Rebuilding the international antiwar movement is the imperative of our era but it is weak, if existent at all, in most countries. However, with the US military buildup against China in the Asia-Pacific region, the big battalions of the antiwar movement in the Philippines & in Japan are leading the way. They are leading the way because US military operations & bases in their countries have created social & cultural havoc for generations of wars.

This is a demonstration in Okinawa yesterday where an estimated 65,000 people protested to demand the US permanently remove its 26,000 troops from the island–that is more than half of the 47,000 US troops & 70 percent of all US bases in Japan. Their placards read, “Our anger is past its limits,” “Pull out the US Marines,” “Don’t rape Okinawa.” Reuters called it “one of the biggest demonstrations in two decades.” There were also an estimated 10,000 protesters in Tokyo, 500 in Sapporo, & 1,000 in Nagoya.

Okinawans have protested the presence of the US military for decades. This protest was ignited by the rape & gruesome murder of 20-year-old Rina Shimabukuro by a former US Marine who worked at the US military base. This monstrous crime is only the latest in years of such crimes, including the 1995 brutal gang rape of a 12-year-old girl.

Protesters also chanted against the 1960 SOFA agreement (US–Japan Status of Forces Agreement), a security agreement between the US & Japanese government similar to the one the US imposed on Afghanistan & Iraq (& India in Kashmir) which provides impunity to US military personnel & employees who commit crimes. It also requires Japan to partially fund US facilities & bases in the country. So these anti-US protests in Okinawa are directed at the heart of the re-militarization of Japan.

NPR reports that the US military has tried to address the issue by imposing curfews, limiting off-base drinking by its personnel, & sensitivity training. But participants interviewed at the Okinawa protest were adamant that these crimes will continue as long as the US military occupies the island & they want them gone. The protest began with a moment of silence for young Rina & an appeal by her father to remove all US bases from Okinawa.

This presents a major political problem to the US military & throws a monkey wrench into the recent agreement with the Japanese government remilitarizing the country. Those bases established after WWII have been militarily critical to the US in several wars, including in Vietnam, Korea, Afghanistan, & Iraq & are strategically vital to the new buildup against North Korea & China. Military personnel stationed on Okinawa can deploy anywhere in the Pacific in under six hours.

Our fullest solidarity with the protesters in Japan who are showing us the way forward to rebuild the international antiwar movement.