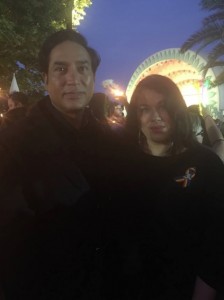 The Wall Street Journal is using the Orlando massacre to ramp up a scurrilous campaign against Muslims. Of course it’s the voice of Wall Street which makes fortunes from war & Islamophobia is the battle cry of war-mongering. They’ve run a series of articles with titles like “Jihad in Orlando” & “Islam’s Jihad Against Homosexuals,” the latter by professional & well-remunerated Islamophobe Ayaan Hirsi Ali.

To pull that off, you have to assume your readers will either swallow any rubbish you publish, are politically dumb as a stump, or that they’re all Episcopalians who don’t know their own catechism. All religions have conservative denominations that condemn homosexuality & most of them, except Catholicism & some other Christian groups, have progressive denominations that accept it as part of human life.

This photo is my friend Elena Ledesma Rashid & her husband, both Muslims. They traveled over 1,000 miles to Orlando to meet other Muslim friends & participate in the solidarity gathering yesterday of 50,000 people.

Does their journey to Orlando prove that Islam does not have a jihad against homosexuals? Of course not. That’s why there are history books that examine the subject–history books that don’t have an axe to grind against Muslims. That’s where you learn Islam has a long history of tolerance, that in the 19th century homosexuality was decriminalized in the Muslim Ottoman Empire which controlled vast parts of Europe, Asia, & Africa.

This would suggest homophobia in many countries has a political heritage rooted more in British colonialism than in religion. But religion did play a role in the sodomy laws. However, it was not the Quran & Islam but the Bible & Christianity that led to the sodomy laws in the overwhelming majority of countries.

The WSJ’s tendentious editorializing about Islam & homosexuality is the same kind of sloppy stuff passed off about Islam & women when the scholarship on Islamic feminism is ten miles high.

There’s no denying some denominations of Islam & many countries with reactionary Muslim leaderships have serious problems with homosexuality that are just as repressive as those of the Vatican & umpteen other Christian denominations. But how many actual massacres of homosexuals by Muslims can the WSJ cite to prove this alleged jihad?

There are unspeakable human rights crimes against homosexuals in many countries–from Russia to Kenya. But have the Islamophobes examined the role of US Christian evangelicals on sexual politics & homophobic legislation in several African countries run by Muslims & in countries like Russia? Highly unlikely because such realities interfere with war mongering.

Enough with the Islamophobia! Enough with using people’s cherished religious beliefs to justify bombers. Religious freedom is a historic acquisition that the war-mongers cannot be allowed to usurp. On the other hand, LGBT rights are yet to be realized in the overwhelming majority of countries, including the USA.

A tip of the hat to Elena, her husband, & the millions of other Muslims, Christians, Jews, & others who stand with the Orlando victims.