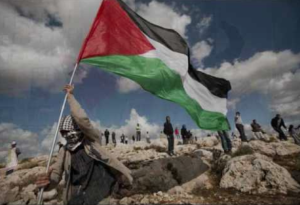 Even US media commentators, all of whom support Israel (or they wouldn’t be on TV), are criticizing Trump’s treachery against Palestinians because ‘it jeopardizes the peace process’. What they mean is that it exposes the US-brokered peace process that led to the Oslo Accords selling Palestinians down the river & legitimizing colonialism. It will be harder for the US to blow smoke out of both sides of its nether-regions. How can there be a peace process while the US declares Jerusalem as Israeli territory; while the US subsidizes new Israeli settlements in the West Bank by bankrolling flights & resettlement costs including Hebrew language courses for Zionists moving from Toledo or Poughkeepsie to Hebron (according to a public document issued under Obama)?

There are massive protests in several places around the world, including Gaza & the West Bank, opposing Trump’s stinking treachery against Palestinians. A Facebook friend from Michigan is organizing a rally against Trump making Jerusalem the capital of Israel. It’s been a while since there have been massive, international protests to support Palestinians. We should all consider calling protests in our own towns where we can also raise the issues of US & European support for the settlements & US military bankrolling of Israel. We could use the rallies to build BDS.

Palestinian Intifada must go international if they are to win justice & a democratic secular state where Jews & Palestinians can live as brothers & sisters–as they did before Zionism showed up.