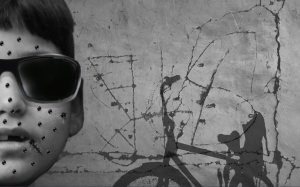 This is from a series of digital art by artist Masood Hussain done in the 2016 uprising in Kashmir when the Indian occupying army went ape with the use of pellet guns–often injuring, blinding, disfiguring children inside their homes. It’s what Ather Zia calls ‘directed stray bullets’.

These are the statistics of the military rampage from July 8th when the uprising began (in response to the murder of a young man whose name & image are censored on FB but whose funeral prayers were attended by over 600,000 people) to December 1st, 2016: