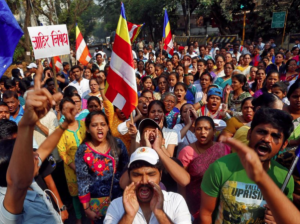 Thousands of Dalit protesters & strikers closed down businesses & schools & blocked roads & transportation in parts of Mumbai, India after Dalits were attacked by rightwing upper caste nationalists at a gathering in another city on New Year’s day. The rebellion in Mumbai & other areas of the state began when rightwing goon squads attacked Dalits at the 200th anniversary celebration of a battle when Dalit fighters in the British colonial army defeated an upper caste army several times their size. The celebration in the village of Bhima Koregaon (170 kilometers/105 miles from Mumbai) represents a historic moment when Dalits defeated upper caste Hindu oppressors. Two Dalit men were killed in the attacks & their deaths are what ignited the Mumbai protests.

Our fullest solidarity with the Dalit protesters who are taking a stand against the rise of rightwing nationalist thugs & against caste oppression.

(Photo of Dalit protesters from Reuters)