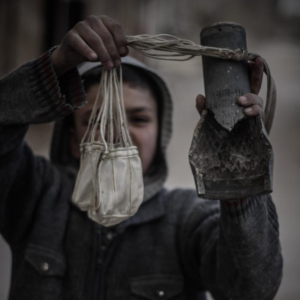 The Syrian army supported by Russian bombers is engaged in an offensive on those areas held by revolutionists against the regime. Medical personnel report that most of the fatalities are women & children. Assad supporters portray this carnage as the liberation of Syria in defense of national sovereignty. But national sovereignty for whom? The Assad dictatorship or for the Syrian people?

This small boy in Douma (15 kilometers from Damascus) under siege is holding up a fragment of a bomb dropped on an unarmed, civilian population.

The only principled demand is for the immediate cessation of bombing & the immediate, unconditional withdrawal of all foreign military forces from Syria.