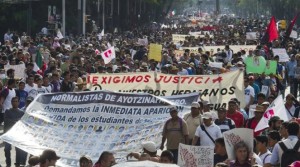 An unspeakable crime has been committed in the city of Iguala, Mexico in the state of Guerrero. On September 26th, municipal cops & members of a criminal gang (the distinction is false) ambushed & opened fire on buses of students from a local teachers college returning from a class trip to solicit donations for school supplies. It is likely not an irony that the students were also raising funds to finance a trip to Mexico City to participate in the annual protest commemorating the Tlatelolco massacre of October 2, 1968 when Mexican troops gunned down 300 protesting students in Mexico City.

It was a gruesome attack in Iguala & after the initial gunfire, dozens of students reportedly fled. Those who didn’t flee & waited for authorities to arrive were fired on three hours later by another vigilante group. A nearby busload of soccer players was also fired on, apparently mistaken for the same group of students. Six students were murdered (one of them was 15-years-old) & 43 remain missing from a massacre Guerrero authorities claim has no known motive. The mayor of Iguala, previously accused of links to criminal vigilantes, claimed on radio he knew nothing about the attacks because he & his wife were dancing. It’s uncertain why the Los Angeles Times reported on October 8th that the 43 students vanished “after clashing with police.” How does an ambush constitute a clash?

Mexican president Enrique Pena Nieto dispatched federal troops to take over Iguala & arrested 22 municipal cops. (They ought to dance that mayor off to jail with them.) One media report suggests the vigilantes are linked to leftist guerrilla movements. Some tried to impute the students in drug trafficking. Nothing like grasping at straws for explanation. There is other media speculation the vigilantes were drug traffickers but the distinction between drug traffickers, Mexican cops, the Mexican government, US Banks, & the US Pentagon is becoming difficult to make. Even the governor of Guerrero acknowledged that the majority of cops in the state were coopted or infiltrated by organized crime. Why he excluded Pena Nieto from that indictment is less a matter of speculation than self-preservation.

Since the massacre, 28 bodies have been recovered from several mass graves. The perpetrators had doused the graves & set them on fire so it is uncertain if the remains are among the 43 missing. No quick assumptions can be made without forensic investigation & DNA evidence since mass murder & burial of undocumented immigrants from Central America by vigilantes is so common in Mexico.

The anniversary of the Tlatelolco massacre might have been the worst political timing for another student massacre. Thousands of people, including teachers in the capital of Guerrero, protested in cities all over Mexico with banners proclaiming “Indignation takes the streets” & with images (as in this photo) of the 43 missing students.

Our fullest solidarity with the protestors in their demand for justice for the students murdered & missing.