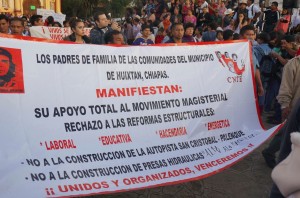 We cannot let the 47th anniversary of the murder of Ernesto “Che” Guevara pass without tribute to the contributions he made to human freedom. His murder in Bolivia on October 9, 1967 by CIA agents is documented & not a matter of speculation.

Whether to cash in on his glory or neutralize him as a pop cultural icon, his image gave rise to a fashion called “Che chic” & his image has for years appeared on tee shirts & other garments. This has created controversy among less than great thinkers who want him denounced in the most scurrilous way or by those who think a tee shirt image unworthy of his contributions. To the former, we say “Eat your heart out!” & to the latter we say, “Lighten up!”

One of the most inspiring things about his tee shirt image is that it appears on the front lines of struggles across this globe over & over again–because whatever political misjudgments he might have had (& guerrilla warfare would be the first of them), he stood for & he championed the very best in human beings & he acted on his convictions. He believed in social transformation & in the ability of human beings to achieve it. And for that, he will always be honored.

Here his image shows up on a banner at a march in San Cristobal de las Casas, Chiapas, Mexico on October 8th. The Zapatista movement mobilized tens of thousands of Mayan farmers, teachers, students, & others to stand in solidarity & demand justice for the six murdered & 43 missing students in Iguala, Guerrero, Mexico. The banners read “Your Pain is Ours”, “Your Dignified Outrage is also Ours”, & “You are not alone”. That is the heritage of Che Guevara & that is why his image will always be on the front lines of struggles against tyranny.