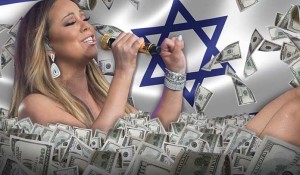 Mariah Carey performed in Tel Aviv yesterday. When asked about it at a press conference, she admitted no one from BDS had appealed to her not to perform. That might not be oversight on the part of BDS supporters so much as recognition of a hopeless cause–another case of knowing when to save your breath.

Carey is romantically involved with Australian billionaire, James Packer, a media & gambling mogul associated in business & politics with Arnon Milchan, the Israeli movie producer who worked secretly for Israeli intelligence on arms deals, including for Israel’s nuclear arms program. Through Milchan, Packer became personally associated with Netanyahu & actually bought a villa next to the Netanyahu’s mansion in Caesarea, halfway between Haifa & Tel Aviv. Carey & Packer dine at the Netanyahu residence when visiting Israel.

Both Milchan & Packer attended Netanyahu’s controversial speech to the US Congress last March. It’s not known whether Packer’s Zionism is a personal commitment or a business decision. The distinction is really irrelevant.

After Sinead O’Connor honored BDS & canceled her performance in Tel Aviv, she claimed her normal performance fee is 10 grand but that she was offered 100 grand to perform in Israel. Carey, who admittedly is more the superstar, earned $500,000 for her single concert yesterday. Her average fee is not known but the entertainment magazines considered the amount exorbitant. TMZ website used the headline “Cashing in on the Holy Land.” Happy singer Pharrell, scheduled to perform for apartheid in Israel & South Africa next month, normally earns between $125,000 & $175,000. It’ll be interesting to see what he gets next month croaking for apartheid.

You don’t have to pawn your soul to support Palestinian justice. Build the economic, cultural, & academic boycott of Israel.