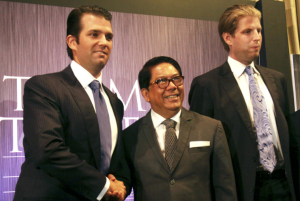 Is anyone feeling assured that Trump has fully & legally disengaged from his business enterprises all over the world so there are no conflict of interests? Have those in charge of that process, whoever they are, offered documentation to any oversight agency? Because from information available on the web, there are sufficient grounds to disqualify Trump just from his business dealings in the Philippines. This is part of my citizen’s brief for impeachment:

To understand the relationship of slum fires & evictions to urban development in Manila, you have to study the process of gentrification mandated by the IMF & World Bank in each of the 16 cities that make up Metro Manila. The program has benefited the real estate industry, making many millionaires & billionaires from building upscale shopping malls, luxury condos, & corporate & banking skyscrapers. But for over 4 million slum residents, the program has been a catastrophe.

This development has required razing slums built on public lands & forcibly relocating thousands of residents or making them homeless. The government agency for building & providing affordable housing isn’t operative since lands needed for public housing compete with lands needed for luxury condos. Manila now has the largest homeless population in the world: over 3 million people, including over 70,000 children.

The number of homeless will likely double in the next decade as farmers continue to be expropriated & farm workers displaced by the IMF model of agribusiness plantations. Every year, 240,000 of the displaced move to Manila, making it the fastest growing city in the world. Squatters, who now comprise 44% of Manila residents, live along waterways, railroads, under bridges, around garbage dumps; thousands make their living scavenging garbage dumps for recyclables.

What does Trump have to do with all this? Other than being central to the exact same process in NYC making it the city with the second largest homeless population in the world?  There are an estimated 75,000 homeless people, including 26,000 children. There are over 3,000 court documents litigating Trump’s vicious real estate practices; the only crime he hasn’t been accused of is arson.

Makati was one of the earliest gentrified municipalities in Metro Manila & is now the financial center of the country. Multinational corporations, major banks, foreign embassies, the Philippine stock exchange are all based there; the richest people in the country live there. It’s where the $150 million,  57-story Manila Trump Tower is being built with one-bedroom apartments selling for $750,000. It is a business venture chock-full of conflict of interest for the Trump presidency.

There are still thousands of slum residents in Makati, even after decades of forcible evictions & slum fires. Tens of thousands of families live in slums along the Pasig River bordering Makati with no sewage facilities, garbage collection, or running water. They are being targeted by Duterte’s death squads which dovetail with forcibly clearing the slums. Of the 7,071 death squad victims killed since Duterte took office on June 30th, many are from Makati. (There are discrepancies on the number.) Duterte just announced the death squads will continue until the end of his term.

It is clearly to the interest of the Philippine real estate industry & to Trump to clear the Makati slums even though Trump does not actually own Manila Trump Tower. It is one of at least 10 similar licensing deals he has around the world where the developers pay $5 million up front to license the Trump name. Century Properties Group Inc. of Manila, is the real estate developer behind the $150 million Manila Trump Tower.

Details of the deal between Trump & Century Properties are not public but those who have reviewed contracts from other Trump branding deals found that in addition to licensing payments there is an annual commission of up to 25-percent of the developer’s revenues. So whether Trump owns the deal or not (it’s not clear he has legally removed himself), his children will be paid millions of dollars throughout his presidency by Jose E. B. Antonio, the head of Century Properties. Part of the deal also includes the sale of Ivanka Trump’s upscale jewelry line through Manila Trump Tower.

Now here’s the kicker: just days after Trump’s election, Duterte appointed Jose E. B. Antonio as special Philippine envoy to the US. Trump will be discussing US policy in the Philippines & in Southeast Asia with his or his children’s business partner, the same guy who writes the checks to Trump or his kids. He will be discussing Duterte’s death squad policies with someone who shares his vested interest in clearing the slums near Manila Trump Tower to increase real estate values. According to Duterte, Trump encouraged the death squads in a phone conversation after the election. Duterte now holds the ability to harm or enhance Trump family business interests. If that isn’t the mother of all conflicts of interest, what the hell is? If that does not require special congressional oversight or constitute grounds for impeachment, then what does?

A special Congressional investigative committee must be appointed to examine all of Trump’s business dealings in other countries & to sever any that involve him or his family that can impact US policy like Manila Trump Tower does. That is not a socialist proposal but one elementary to capitalist rule.

The photo is Trump’s two sons with Jose E.B. Antonio at Manila Trump Tower during the US election campaign.