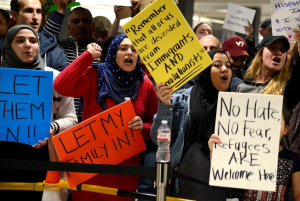 One hopes those who disdained the Women’s Marches for marching against Trump’s policies when they didn’t march against Obama will at least recognize the monumental importance of tens of thousands in 30 US cities protesting at airports against Trump’s Muslim ban. Not only are the demonstrations large, but they are growing. That is what it will take to reverse the executive order.

Refugee rights (today all immigrants are refugees) are an imperative political battle for our generation. Facing down racism & xenophobia with battalions of human solidarity, refusing to be manipulated by hatred of Muslims or Mexicans will affect not just asylum rights but the conduct of wars that force millions to flee their homes.

Photo is protest at Dulles airport in Washington, DC.