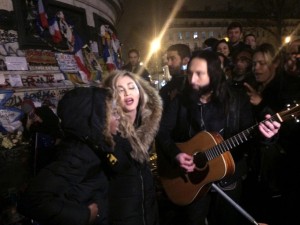 Here’s Madonna singing up a storm at the Place de la République in Paris in tribute to the victims of the November 13th terror attacks. For those who like to grandstand off the tragedies of others, this is becoming a de rigueur pilgrimage site. Bono & the Eagles of Death Metal (the band playing at the Bataclan theater when it was shot up) have already been there for photo ops & crocodile tears.

But golly, their tributes ring so hollow when you realize how in tune their grieving is with reactionary politics. Madonna & the Eagles group both flouted Palestinian appeals to honor BDS & performed in Tel Aviv, Israel, ignoring barbarous Israeli terrorism against Palestinians; no crocodile tears were squeezed out for them. Madonna who last performed Tel Aviv in 2012 is negotiating to return the summer of 2016. The Eagles group (whose lead singer is rabidly right-wing) performed Tel Aviv in July & is also slated to return next summer. Bono, who never tires of groveling, recently sang a concert tribute to Shimon Peres, an architect of Israeli apartheid.

You live a long life; you never get used to the phonies who exploit political tragedies & suck up to power.

Build & honor the economic, cultural, & academic boycott of apartheid Israel. It will help enormously with the dyspepsia from reading the news or watching these phonies in action.