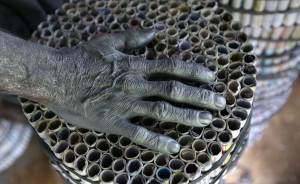 One of the distinctive features of sweatshop economics, as well as non-unionized workshops everywhere, is the reckless disregard for workplace safety & long-term health of workers. It’s as if history is moving backwards to the early barbarism of the industrial revolution–complete with child labor.

These are the gunpowder-covered hands of a worker in a Sri Lankan fireworks factory. Since its invention in 9th century China, gunpowder has been a military & industrial mainstay used in warfare & mining. Today, it’s mainly used in fireworks for pyrotechnic displays, firecrackers, older guns, & some grenades. Science has developed more powerful ways to kill people & blow things up.

Gunpowder is a mixture of sulfur, charcoal, & potassium nitrate (saltpeter). The toxicity of gunpowder is usually reported as low. But if you go to the Material Safety Data Sheet (MSDS) for each of those ingredients, you see a different story. The MSDS is a system used in US manufactories cataloguing chemicals according to toxicity, health effects, reactivity, storage, disposal, protective equipment, & spill handling procedures. It’s intended for workers & emergency personnel. MSDS are not the bible of chemicals because they are provided by the chemical manufacturers, contain only essential information, & often omit important problems with the chemicals. It’s a baseline kind of thing, not comprehensive analysis nor full disclosure.

So if you go to the MSDS for gunpowder ingredients, you can read what dangers it presents for this Sri Lankan man in his workplace–& they are considerable, including its explosive & flammable properties. For his general health, working with gunpowder without protective equipment like gloves, masks, or hazmat attire, is absolutely criminal. The list of potential health hazards is a mile long. To name only a few: skin, eye, pulmonary, & respiratory tract irritations & diseases (asthma, emphysema, bronchitis); constipation & rectal ulcers; gastrointestinal disorders & vomiting; blood disorders like anemia, cyanosis, brown-colored blood; convulsions; headaches; dizziness; inability to breath; rapid heart rate; sinus problems; unconsciousness; & of course, an early death.

Unions have gotten a bad rap in the past several decades because they’re more often dues-gathering operations rather than a vehicle for workers to protect themselves in the workplace. They’re also often run by hotshots who never saw the inside of a minimum wage factory & hold working people in contempt. (That’s not too harsh a judgement.) Unions must be transformed where they are corrupted & built where they don’t exist because working people have a right to a safe & healthy working environment. We are not chattels to be used & disposed of like garbage. In what is becoming the mantra of neoliberalism, the barbaric phase of capitalism, ‘we are human beings & not beasts of burden’.