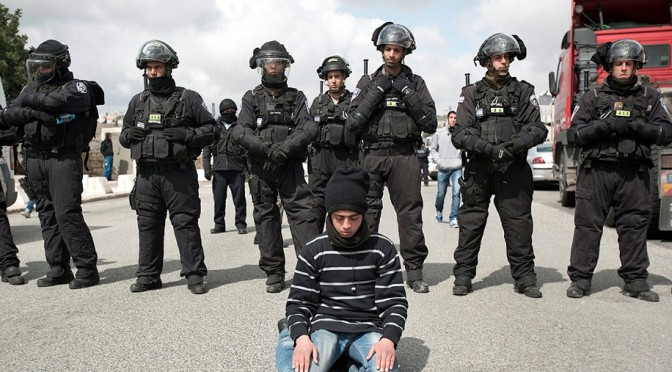 This photo is another example of how the media doesn’t always completely lie about Palestinians & Israel but it never tells the truth. The caption to this photo read: “A Palestinian teenager kneels during Friday prayers as Israeli riot police block off a street in East Jerusalem.”

With such sketchy information, one might be led to think the riot cops are there to deter crime or rioting. In fact, as part of Israel’s occupation of East Jerusalem to expropriate it from Palestinians & as part of its on-going campaign to destroy the Al-Aqsa Mosque in East Jerusalem, Israel has banned all males under 50-years-old from observing Friday prayers. Hundreds of Palestinian boys & men are forced to pray kneeling on the public streets.

So this young guy is not only exercising religious freedom; this is a courageous act of political defiance. Protestors around the world who have faced phalanxes of riot cops know just how courageous this is since at any moment this young man could be beaten to a pulp.