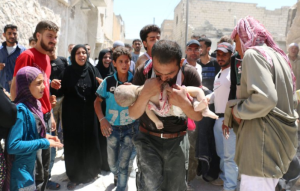 This article in today’s NY Times is by Lina Shamy, who Twittered reports from east Aleppo throughout the murderous siege by Syrian & Russian warplanes. She is one of those citizen journalists who Assad propagandists like Beeley, Bartlett & others attempted to discredit as associated with Al-Qaeda. She was evacuated in December when the Syrian army took over & continues to report from Syria. You can follow her on Twitter at: Lina shamy@Linashamy.

This is the account of a Syrian revolutionist. You can choose to hear her authentic voice or you can choose the inflammatory vilifications of paid propagandists. The distinctions between the authentic & the venal are not subtle.

(Thank you to Usman A Khan Tahir for this article)