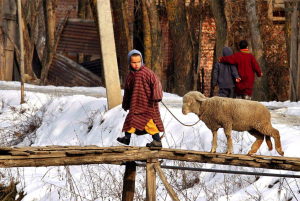 Came across this photo I posted in 2011 from today’s Facebook memory wall. In early 2012, FB deleted over 300 of my posts, most of which were about the Arab uprisings (which were glorious to witness), the Palestinian struggle, or the Haitian earthquake.

The only reason I didn’t lose this post is that on January 20, 2012, a Facebook friend reposted it. Kashmiri friends were already badgering me to study their struggle & write about it but clearly from the brief caption I had not yet done that & referred to Kashmir as “a disputed area embroiled in military conflict between India & Pakistan” & the location of the photo as “Srinagar, India.”

Deepest regrets to my Kashmiri friends for the truancy in educating myself but deepest gratitude also for not giving up & badgering the hell out of me till I took your struggle seriously.

The really delightful photo is a little boy & his sheep in the outskirts of Srinagar. He’s likely involved in Intifada now.