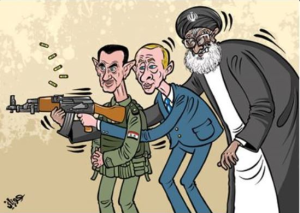 Libertarian left’s antiwar position: no US intervention in Syria.

Their political rationale: I am not an Assadist but I believe in national sovereignty. So Russian & Syrian bombers, Irani, Hezbollah, sectarian mercenaries are freedom fighters against “head-chopping jihadists” trying to take down Assad.

Their mantra: there was no Syrian revolution against Assad. The Syrian people love him & his wife because they’re so pretty, western, & haute couture.