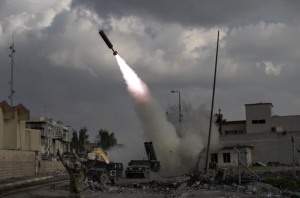 Liberation US-style: these kids lining up in the rain at a refugee camp were forced to flee the fighting in Mosul between ISIS fighters, Iraqi ground forces & US bombers. The bottom photo of a rocket shot off by Iraqi forces is what they were fleeing from.

The ISIS fighters are urban guerrillas living amidst hundreds of thousands of civilians, including children, elderly, infirm, disabled, pregnant women. Doesn’t matter how damn high-tech those bombers are, in such a situation it is civilians who will bear the brunt of the suffering & deaths. Unless of course that is precisely the intent of bombing the entire city & only ostensibly to get at less than 5,000 ISIS fighters hiding behind civilians.

Bombing civilians is not the way to end the tyranny of ISIS.
US our of Iraq & Syria.

(Photo of children by Ahmad al-Rubaye/AFP/Getty Images; photo of Iraqi rocket in Mosul by Felipe Dana/AP)