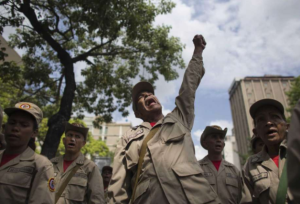 It should be no surprise that Assad supports Venezuelan president Maduro & portrays popular opposition to him as US orchestrated–& vice versa, Maduro has long supported Assad’s regime. Telesur news, which is partially owned by Venezuela & headquartered in Caracas, has long promoted Assadist views, even publishing the deranged & scurrilous writings of Tim Anderson, like the one titled “The Omran Deception” vilifying the tiny boy shell-shocked by Russian bombing of Aleppo.

When Vanessa Beeley attended the “Rebuilding Syria” conference in Helsinki last January, the local chapter of Hands Off Venezuela & the ambassador of Venezuela co-sponsored a talk she gave outside the conference.

The political affinities between Syria & Venezuela are not apparent except in the repression of dissent & in the politics of those who uncritically support both Assad & Maduro. Modeling Assad in his military response against revolution, Maduro has announced plans to mobilize the Venezuelan National Bolivarian Militia against hundreds of thousands of protesters. He also plans to increase the Bolivarian Militia (created by Hugo Chavez in 2010) from the current 100,000 armed civilians to 500,000.

As a branch of the Venezuelan National Armed Forces, the Bolivarian Militia is comparable to the US National Guard. Using them against unarmed protesters would militarize public protest, outlaw the right to demonstrate, encourage Venezuelans to shoot protesters down in the street by claiming they are orchestrated by the US Pentagon.

Even if Venezuela was a socialist utopia or was like heaven on earth, a democratic government has no rights whatsoever to take up arms against those who disagree with the ways the country is run.