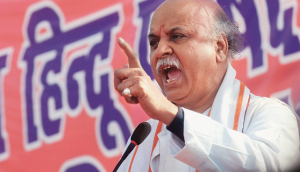 Pravin Togadia, an extremist nationalist leader in India, called on the Indian government to use carpet bombing to stop the stone throwers in Kashmir. This guy is a medical doctor & a cancer surgeon notorious for hating Muslims & implicated, along with prime minister Modi, in the 2002 pogrom against Muslims in Gujarat state.

Against such derangement, Kashmiris cannot be allowed to stand alone. Educate others & build solidarity whilst many Kashmiris are unable to access social media.