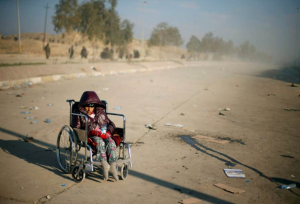 Liberation US-style in Mosul, Iraq: you don’t have to graduate from war college to know bombing & shelling cities with nearly 1.5 million civilians to take out less than 5,000 guerrilla fighters is a catastrophic strategy.

The overwhelming number of victims will be civilians caught in the crossfires, bombed out of their homes, subject to chemical attacks from one side or the other–likely both–& traumatized & terrified from living in a war zone. Parents can hardly comfort the children when they are sustaining shell shock themselves & while fleeing for their lives.

Recent media reports say 60,000 civilians have fled Mosul since the offensive began last October (with men & boys subject to arrest, harassment, assault by the Iraqi army) but the estimate is almost certainly dead wrong since it was reported three weeks after the offensive began that 40,000 had already fled.

This little girl in a wheelchair is waiting for a truck to pick her up & carry her to a refugee camp or at least out of the crossfires.
ISIS has to be defeated but making life a living hell for hundreds of thousands of civilians is not the way to do it. It is not a liberation but an occupation.

US out of Iraq.