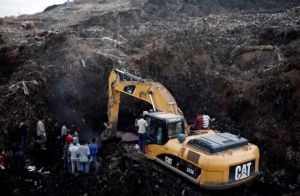 When the history of neoliberalism, the barbaric phase of capitalism, is written, it will require a special court to handle the posthumous indictments of the officials, corporations, armies, institutions that allowed the most monstrous crimes against human beings.

The contemptible but impeccably manicured Lawrence Summers, a former economist for the World Bank, president of Harvard, & official in the Clinton & Obama regimes, said this about the practice of US & European countries dumping millions of tons of toxic waste & putrid garbage in plundered countries:

“Just between you & me, shouldn’t the World Bank be encouraging more migration of the dirty industries to the less-developed countries?…the economic logic behind dumping a load of toxic waste in the lowest wage country is impeccable & we should face up to that…I’ve always thought that underpopulated countries in Africa are vastly under-polluted, their air quality is probably vastly inefficiently low compared to Los Angeles or Mexico City.”

Because capitalist managers like Summers found the logic so impeccable, these mountains of landfills are all over the place in plundered countries & have become the only source of income for millions of dispossessed rural workers forced to move to urban slums. They earn a living picking through toxic metals & chemicals from old electronics, dirty diapers & stinking dog poop, decaying food full of maggots & bacteria in order to find recyclables to sell for a few bucks a day.

Families that live in slums near the dumpsites have astronomical skin & respiratory infection rates & high cancer rates but no access to medical care because part of scorched earth neoliberalism is privatized healthcare. We’re talking barbarism.

This photo is the garbage dump in Addis Ababa, Ethiopia, a country engaged in a neoliberal development binge. Hundreds of people lived in makeshift homes on the 50-year-old dump. On Saturday there was a landslide as the garbage shifted, burying at least 49 shelters, killing 65 so far, & with many still missing.

Neoliberal capitalism is a sociopathic system, an antisocial system that considers the poor a useless excrescence on the body politic. True to that derangement, the authorities did not provide skilled search & rescue operations, equipment, ambulances, grief counselors. Bereaved family members were left to scrounge through the garbage by hand & shovel to find their own beloved without safety equipment & using their mobile phones for light in night searches. They had to use plastic sheets to carry the bodies & survivors found because not even stretchers were provided by authorities. Families complained bitterly that the back hoe shown here was brought in for media cameras.

Contrary to the racism & stinking elitism of lowlife cement-heads like Lawrence Summers, poor working people are human too. One man wandered through the scene crying crying “My babies, my babies, my little daughter.” Neighbors explained that he had lost his wife & four children.