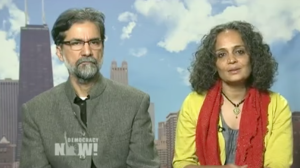 Although no anti-occupation movement has developed in India, there are many impressive Indian activists who are outspoken in opposition to the occupation of Kashmir & in defense of Kashmiri self-determination. Arundhati Roy & Sanjay Kak are the most prominent among them. They have both spoken & written internationally in defense of Kashmiris. This interview with them from March 2013 is almost ancient history but is a very clear elaboration of the basic issues.

Building an antiwar/anti-occupation movement is not as easy as some may think. There are contending forces, including those who call themselves progressive, who obstruct such a development because they’re equivocal politically, sectarian & want to control the process, have a passive political orientation, or are politically corrupt. Those who continue to do the essential educational work about the occupation despite the problems, setbacks, & lack of mass reaction know that is the only way to lay the groundwork for a social movement that can help Kashmiris force the Indian army to withdraw.

We should take a moment to honor those Indian activists who fight the uphill battle to build an anti-occupation movement.