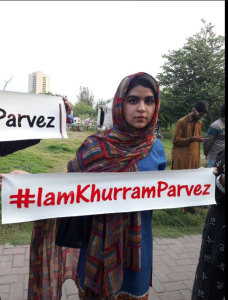 The Jammu Kashmir Coalition of Civil Society (JKCCS) who are handling the legal & political defense of Khurram Parvez have been informed by Indian authorities that he is being detained under the Public Safety Act. That means he can be held on no charges for up to two years because they deem him a threat to public safety–which of course means that his central role in defending human rights in Kashmir is impeding India’s ability to commit human rights & war crimes with impunity.

The JKCCS is continuing legal action on his behalf within the court system. It is alarming however that police have informed JKCCS that Khurram is being taken to a prison in Jammu for lodging, which is 300 kilometers away from his family & legal counsel.

JKCCS say they “will continue to campaign for the immediate release of Khurram Parvez. His case is emblematic of the absolute disregard of the Indian State for the application of the rule of law, whether international or domestic, in Jammu & Kashmir.”

Until he is released unharmed & without condition, “Je suis Khurram Parvez” is the mantra of human rights defenders around the world.