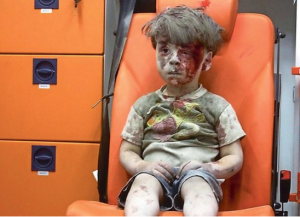 Do antiwar & human rights activists really want to be associated with the scurrilous & absolutely shameless campaign against 5-year-old Omran Daqneesh being waged by pro-Russian & pro-Assad activists? Omran was photographed after rescue from a building in Aleppo bombed allegedly by Russian warplanes on August 17th. His 10-year-old brother Ali was playing outside when the airstrikes occurred & he died in hospital on August 20th of his injuries.

Pro-Russian & pro-Assad activists claimed from the very beginning, without a moment of investigation, that the image was staged by “jihadists” for propaganda purposes. They made unconfirmed allegations that the photographer is linked to a terrorist group who beheaded a child earlier this year.

One leading Assadist writing in TeleSUR calls the photo the “Omran Deception.” What exactly is the nature of the deception? Are children under aerial bombardment in Syria not traumatized as little Omran clearly is? Are there not thousands of children who have died & been injured from bombing attacks in Syria? What is it about the photo of little Omran that so enflames Assadists?

The propagandists for Assad & Russia are pretending now that they’ve unearthed the facts of this deception by investigation but they are repeating exactly the same lies they told when the photo first was published.

What concerns them is not a staged photo. There is no need to stage the carnage of war as it affects small children. There are hundreds of photos of small children, elderly, injured being pulled from cement rubble by rescuers–as anyone who reads a wide variety of media should know. What concerns them is that Syrian & Russian bombing of civilians might be exposed by this photo of little Omran. If they can’t blame the bombing on the US or jihadists, then they have to create a campaign to discredit a small boy who is the victim of Russian & Syrian bombing of civilians.

When trying to decide where justice stands in Syria, one should pay close attention to the methods used to prove a political analysis.