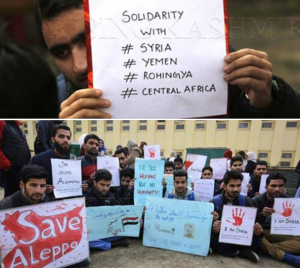 Reposting this from December 2016 when Kashmiris had already sustained over 6 months of military siege by Indian troops, in particular bombardment by pellet munitions, & never bent the knee to occupation. Still they publicly stood in solidarity with the oppressed around the world:
****
Kashmiri medical students in solidarity with the Syrian revolution, Yemen, the Rohingya, Central Africa:

Sometimes the weight of violence & militarism in the world overwhelms & seems so daunting because there is not yet a powerful enough international counterforce & because the old antiwar movement has been hijacked by propagandists & become fractured by war-mongering & Muslim-hating currents.

Then a group of students in occupied Kashmir shows the way & we know where the forces of the new antiwar & solidarity movements will emerge. They renew our energy & confidence that humanity will fulfill its historic mission to create a world suitable for human beings led by the most oppressed who have been steeled in action by their own struggles against occupation & colonialism.