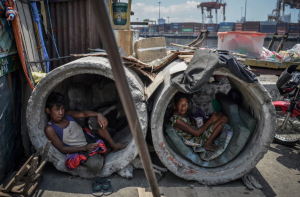 Homeless in Manila, Philippines: Manila has the highest population of homeless people in the world with over 3 million having no kind of shelter. There are 4 million others living in makeshift slums now under scorched earth siege by the government & neoliberal investors who want the slums cleared & the residents forced to relocate to the other side of hell.

That is what Duterte’s so-called drug war is all about. For years, the Philippine government has used arson, forcible eviction & bulldozing slums to remove residents in order to build upscale shopping malls, resorts, golf courses for the world’s elite. Trump Towers in Manila is part of that schema which means Trump, Inc. has a vested political interest in slum clearance.

To facilitate the process of slum clearance & overcome resident’s aggressive resistance, Duterte is enforcing a death squad war on the poor, a bounty war where vigilantes & police are offered rewards for every corpse they bring in like it was trash removal rather than extrajudicial executions of the poor. That means Trump has a vested interest in the death squad war on the poor.

Since Duterte became president on June 30th, 2016, over 9,000 men, women, & teenagers have been shot down in cold blood on the streets for suspicion as a drug user or small-time peddler. The government officials, bankers, big-time operators moving the drugs from China & Myanmar into the Philippines are making plans to cash in on those upscale malls & resorts & looking forward to doing nine rounds on the swanky new golf courses.

The homeless man & woman here live inside concrete drainage pipes which serve not only as sleeping quarters but as defense against vigilante hit men.

Our fullest solidarity with Filipino human rights activists & organizations standing against Duterte’s war on the poor. It should come as no surprise that Assad supporters are among Duterte’s strongest supporters.