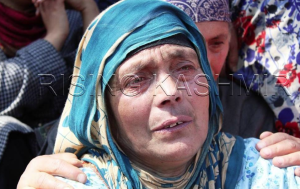 This woman is one of thousands mourning & protesting in Kashmir over the murders of 20 people yesterday in three hunt to kill operations by the Indian army. It isn’t certain how many were injured but Srinagar hospital reports that 33 of the 34 unarmed civilians admitted for treatment suffered pellet gun injuries, mostly to the eyes. The other sustained a bullet injury.

In the several months of the 2016 uprising against the occupation, the Srinagar hospital treated 9,000 pellet gun victims, which is about 50 pellet gun injuries a day. We may live in barbarous & surreal times, but civilized humanity still considers that savagery & under international law it is deemed human rights criminality.

Stand with Kashmiris against this violence. Spread the word. No to occupation. Yes to self-determination.