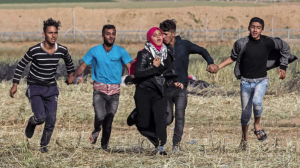 The photo is young people running from sniper fire at the Great Return March in Gaza on Friday. Eighteen unarmed Palestinian protesters were killed, over 1,400 were injured, 757 by live ammo, & the others by rubber bullets & tear gas inhalation.

Haaretz published an opinion piece by Odeh Bisharat titled “Flourishing Israel Is Drenched in Palestinian Blood” where he wrote: “Millions are celebrating Passover on the Israeli side while masses of others are burying their dead on the other side. And those Israelis who feel wonderment over how their country is flourishing while their neighbors bleed from sniper fire coming from the Israeli side should seek to find out where they lost their humanity. It may be the height of economic prosperity, but it is happening alongside the depths of moral deterioration.”

Stand with Palestinians in their struggle against occupation, apartheid, & for self-determination. Honor the economic & cultural boycott. Be prepared to hit the streets to rally in solidarity against this violence.