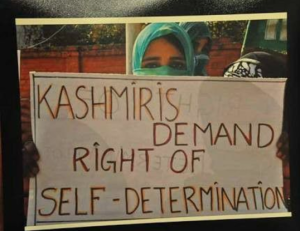 Kashmiris have enough to worry about without anxiety that India closing down the internet will create again the long international news blackout of the past decades. The brutalities & barbarity of the Indian occupation stand exposed before the world. Pellet munitions against children & unarmed protesters was a titanic shift India should never have made.

Aung San Suu Kyi & the military junta of Myanmar, Bashar Assad of Syria, the Australian, European, Turkish, US, & other governments have attempted to blackout all news of their monstrous human rights & war crimes, including against refugees by allowing thousands to drown or live rough in subzero temperatures. Reporters from around the world have been murdered by the thousands to silence the voices of the oppressed.

You have allies now around the world to stand with you. Believe me, we will beat the bushes to report what is going on in Kashmir. Your struggle is our struggle. It’s no longer possible to silence your voices.

(Photo thanks to Satyadeep Satya)