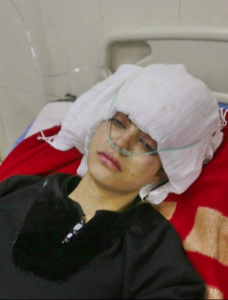 This is 17-year-old Iqra, a student lying in the neurosurgery ward of a Kashmiri hospital with a fractured skull & brain hemorrhage after occupying forces attacking peaceful protesters catapulted a rock at her head.

Other students were also seriously injured & their lives endangered when the occupying army attacked them with pellet munitions, tear gas, & truncheons. Mind you, tens of thousands of students were rightfully protesting Kashmiris being used as human shields, being executed just walking down the road, being beaten to a pulp by gangs of soldiers, being denied their democratic & civil rights to protest occupation & violence against them.

Now Indian media reports government plans to shut down FB & WhatsApp in Kashmir to “clamp down on rumour-mongering” & “stop videos & pictures of alleged atrocities by security forces from going viral.” You can’t say the Modi regime hasn’t learned anything from the Assad regime.

If the Indian army of 700,000 soldiers (one to every 17 Kashmiris) is not committing human rights crimes in Kashmir, it would have nothing to fear from those videos & photos or from Kashmiri activists on social media. It’s threatening to close down the internet for the exact same reason Aung San Suu Kyi will not allow human rights monitors & journalists into Arakan state & that Assad denies access to journalists who aren’t embedded up the ass of his military like Bartlett, Beeley, & Fisk.

It must be overwhelming for Kashmiris to sustain such relentless violence, to see beloved classmates, neighbors, friends, family disfigured, disabled, executed before their very eyes.

International solidarity has never been more urgent or compelling & should begin to take organizational form with solidarity committees that can coordinate educational forums, call rallies, mobilize human rights activists to stand with Kashmiris.

(Photo of Iqra is from Kashmir Today)