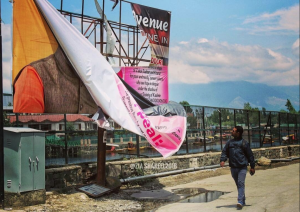 This is a billboard in Srinagar with a picture of Indian prime minister Modi which has been torn down. He is on a one-day visit & to make sure Kashmiris weren’t out in massive numbers to protest, he shut the whole of Kashmir down, including the internet. Most of us never heard of Kashmir or knew about their 70-year freedom struggle or the brutal 30-year military occupation because of a systematic news blackout. That was only changed when Kashmiri activists took advantage of social media to present their case for self-determination. The fact that there is more news coverage in media is only a result of the work Kashmiri activists continue to do to educate & build active solidarity with them–so that media can get ahead of the narrative presented by Kashmiri activists.

Closing down the internet in Kashmir is frequent & only to silence the voices of resistance. One of the most inspiring things about the Kashmiri movement is the solidarity they express with the oppressed around the world. There is hardly a day without hunt to kill operations, protests, civilian arrests & deaths. But still Kashmiris protest for Palestinians, Rohingyas, Syrians, West Africans, & others. So on this day when they are silenced, we should stand with those who teach us so much about the meaning of human solidarity with the oppressed.