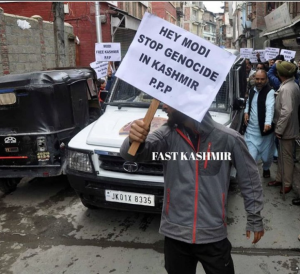 Lal Chowk, where this protest against Modi took place, is a city square in Srinagar that is a traditional place for political meetings. It is said Lal Chowk, which means Red Square, was named by socialists inspired by the Russian Revolution. It has historic importance to Kashmiris because it was in Lal Chowk in 1947 that Jawaharalal Nehru said “The fate of Kashmir will ultimately be decided by the people” & where Kashmiris were promised a referendum to choose their political future. So it is more than appropriate that Kashmiri activists, defying the curfew & shutdown in Kashmir, chose Lal Chowk to protest Modi’s visit today despite the heavy deployment of Indian troops the length & breadth of Kashmir.