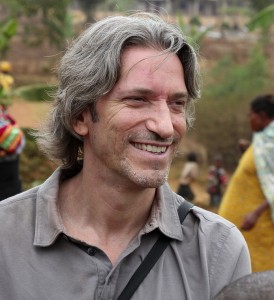 Media is favorably reporting the launching of a new joint project by John Prendergast, a US operative in Africa, & his celebrity stooge/shill George Clooney. The two go back several years now war-mongering against Sudan over the issue of Darfur. The new initiative called The Sentry is ostensibly to map the network of war profiteering in South Sudan, Sudan, Uganda, The Central African Republic, & the Democratic Republic of the Congo. They’re launching the project under cover of the Enough Project, a front group run by former officials in the Clinton administration, including Prendergast. In 2010, under the umbrella of Enough, Clooney & Prendergast launched a satellite surveillance program in the same region ostensibly as part of a rapid response system to “deter mass atrocities.”

Prendergast is a telling study in how covert agents operate & how governments preempt & use the language of human rights to advance a military & neoliberal colonial agenda. Prendergast is touted all over media as a human rights activist in Africa–another great white savior. There isn’t a media genre he hasn’t invaded in his safari outfits & where he isn’t treated like a self-sacrificing hero: he does opeds, articles, news interviews, documentaries, books, even “Law & Order” episodes.

For over 25 years he has been involved in Sudan, Darfur, & claims he was instrumental in the secession of South Sudan into a separate country. You can bet your bottom dollar, he’s involved in the chaos & trauma of the entire region–with Chinese oil exploration a primary concern. He weighed in heavy on the side of “Kony 2012” about Uganda & was likely involved in the making of that ill-fated political mockumentary which led to the deployment of US troops to Uganda.

If you take a close look at who this guy answers to you’ll see his humanitarian credentials stink to high heaven. His collaborators include Obama, the Clintons, Susan Rice, the National Security Council, & several foundations that are nothing but fronts for US foreign policy in Africa. In other words, his mission is to advance US economic & military interests in Africa, not human rights, & nothing he says can be trusted.

The problem with dragging out a shill like Clooney is that our humanitarian war-monger has never spoken out against US wars in Iraq & Afghanistan. He’s never denounced US bombing in Pakistan, Yemen, Somalia, Libya. He hasn’t said boo about the plight of millions of refugees from Africa drowning in the Mediterranean. His tender heart & indignation only beat in sync with US militarism & the Pentagon.

The case for US military engagement in Africa is being built–lie by lie, with phony documentaries, movie stars & everything else they can marshall–& the surveillance apparatus is being set up under the guise of human rights. This bogus & war mongering campaign must be answered with a resounding, “Hands off Africa”.

(Photo is mug shot of John Prendergast by Jeff Trussell)