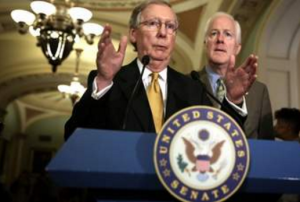 Texas Senator John Cornyn has become a leading figure in destroying Obamacare, which is a bad deal but a better deal than no health insurance at all. He’s the schnook who always stands at Mitch McConnell’s side looking like a stuffed St. Bernard dog from Madame Tussauds wax museum.

Don’t be fooled by his hapless demeanor. He’s hapless & clueless alright but in a criminal way. This is the same creep who campaigned across Texas, including here on the border, to speedily deport thousands of undocumented refugee children back to Mexico & Central America. Without shame, he tried to associate desperate, frightened, victimized children with prostitution & drug trafficking. Nothing more need be said to condemn this despicable politician.

(Photo is McConnell & his lieutenant Cornyn on the right)