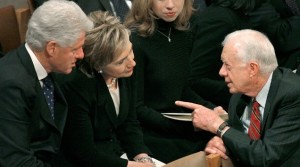 Born-again humanitarian Jimmy Carter is frequently cited for his views on politicians: recently for saying he preferred Drumpf to Cruz & in a two-year old interview (circulating on FB) for saying Clinton was ineffective in bringing about peace during her tenure as secretary of state. He compared her unfavorably to John Kerry who he said made ‘enormous strides’ in negotiating between Israel & Palestinians–for which there is no evidence except to the contrary.

Let’s cut the crap. There’s no question that Clinton, in league with her lowlife husband & in her capacity as secretary of state, milked Haiti for immense personal fortune in what has to be one of the most grotesques cases of grand larceny in US history. There’s no question she milked her relations with Israeli officials to get Zionist bucks & backing for her presidential campaign. She’s a sleazy politician. That’s what sleazy, self-serving politicians do.

But political relations between Israel & the US are determined by the Obama regime in concert with oligarchic policies. The White House backed & bankrolled three murderous bombing assaults on Gaza since 2008; boasted of helping resettle & integrate US settlers to Israel; & continues to assist Israel to the tune of over $4 billion a year. Clinton & Kerry functioned as Obama’s representatives & were/are not forging new initiatives in peace-making.

Carter’s metamorphosis is a scam. Just on the issue of Palestine, the guy still has not answered for the Camp David Accords which brokered arms to Egypt to use against its own people in return for abandoning the Palestinians. More importantly, his transformation is to feed the myth of lesser evilism: if we can just find a good guy, a man of the people, a guy with a big heart, then the presidency can serve democracy rather than the oligarchy. (The choice of gender was not inadvertent.) If the Occupy movement taught us anything, it is that there is a one-percent & a 99-percent & our economic, social, & political interests are at odds. The president of the US represents the one-percent.

But Carter has a whole lot more to answer for, including Iran, El Salvador, the Philippines. And that’s the short list. So he really isn’t a go-to guy for political evaluations. If he’s repulsed by Clinton’s corruption, so are we. What’s his alternative? Since he knows exactly how this government is run & in whose interests.