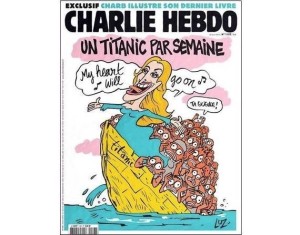 Let’s hear a thunderous chorus of “Je suis Charlie” now. Let’s see if every one of the asses who farted about free speech to have a go at Muslims will utter a peep of outrage over this monstrous racism. Let’s see if pedants will chide us now for missing the point & being thick about satire.

If we are restrained by mercy from having a lynching party, why not instead a thunderous chorus of denunciations for the politicians who gathered for free speech (my ass!) in Paris last January & are now refusing entry to hundreds of thousands of immigrants? Those immigrants are our brothers & sisters & we take their drownings as seriously as we take our own families. The monsters who can work up a laugh should be shunned & vilified for pandering to the most backward violent forces in modern times.