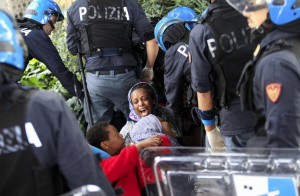 Just like refugees at the border between Morocco & the Spanish territories of Ceuta & Melilla have Moroccan cops beating them from the rear & Spanish cops beating them from the front, African refugees here at Ventimiglia, Italy on the border with France have Italian police trying to drag them back & French police trying to keep them out. And to think that just a week ago, the Italian government was pledging to deny them shelter & right-wing politicians in the north were vowing to keep them out of the northern Italian provinces. Now they’re fighting to keep them sleeping on the ground?

This is where you see the bare-knuckles of European Union (EU) immigration policy, racist & xenophobic up to its eyeballs. The EU is making a mockery of international law & exposing it as nothing but unenforceable sentimentality. And not for the first time. The duty to give sanctuary should not have to be embedded in law but when it is, it ought to be respected. Under neoliberalism, those humanitarian laws are rendered useless. That’s what political solidarity is all about: enforcing through massive political & international pressure the right of human beings fleeing war, occupation, bombing, plunder, poverty to be given sanctuary.

This family is part of the group in Ventimiglia, Italy refusing to budge & go back to a place that doesn’t want them, where politicians are whipping up hatred against them, & where they’re denied even a place on a cement floor.

Our fullest solidarity with them.