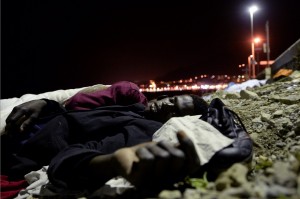 We should take a moment to honor the millions of immigrants & refugees now on a forced march from neoliberalism, the barbaric phase of capitalism, & commit ourselves to standing up for immigrant rights as human rights. We (still) have the political power to act on their behalf since they’re being denied all rights & sanctuary. We are guided by the iron law of social transformation that “an injury to one of our brothers or sisters is an injury to all of us.”

This fellow is sleeping rough in Ventimiglia, at the border between Italy & France. For the past four days there’s been a stand-off between a group of about 200 African refugees (including women & children) & the French border police. With admirable defiance, the exhausted, beleaguered refugees are refusing to leave the border until they are admitted to France & can continue their journey north to live & work.

Our deepest respect for the toughness of the human spirit in the worst of situations & our fullest solidarity. Godspeed on their journey.

Immigration is a human right. Open the damn border.