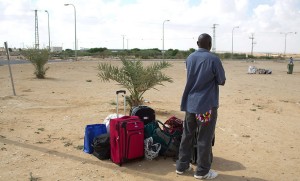 When you live under a colonial & apartheid regime like Israel, sarcasm becomes state policy & you wish Jonathan Swift was here to politically eviscerate it. In 1954, just a few years after Israel set itself up as a Jewish-only state, it enacted the Prevention of Infiltration Act to legitimize deporting & denying entry to Palestinian refugees (now called “infiltrators”) trying to return to their homes. In 2013, the Knesset amended the law to include African refugees seeking asylum from war & plunder–much of which Israel was directly involved in (like in Sudan). The mandate of a Jewish-only state necessarily preempts international law & the highest achievements of human civilization requiring sanctuary for refugees from war. But why should the immigration policies of an apartheid state be any different from the neoliberal barbarism of the European Union & US?

There are an estimated 50,000 African refugees now in Israel–primarily living in Tel Aviv & Eilat where they find work in the hospitality industry. Ironically, Tel Aviv is the venue for many, if not most, concert performances targeted by the cultural boycott of Israel (BDS). That partially explains why Israel values Black performers like Pharrell Williams ignoring the boycott & pays them big bucks to do so–because they hope it provides cover for their racist treatment of African refugees.

For the past few years, Israel has employed several deterrent tacks against the refugees: politicians (including the new UN Israeli ambassador Danny Danon) have incited violence against them; they’ve increased enforcement against those employing them; their ability to send money back to their home countries is restricted; many, including children, were given a chump change stipend & a one-way ticket either to their home or to a third country; & several thousand were incarcerated either at the Holot or Saharonim prisons.

This month the Israeli High Court rejected a petition by Israeli human rights groups against the provisions in the Infiltration Act allowing incarceration of refugees. The court ruled them constitutional but tipping its hat to some measure of human rights–one which Israel denies to Palestinian political prisoners who are indefinitely detained–the court ruled that the length of imprisonment must be limited to 12 months.

That means 1,200 African refugees in Holot & Saharonim prisons must be released this week. The High Court didn’t want to get carried away with human rights for refugees so it banned them from working & living in Tel Aviv & Eilat. There were no details offered by Israel on what punishment would be meted out for violating that restriction. Likely it would be summary deportation without due process or another 12 months in jail.

Meanwhile, Israel has recruiters out across the globe looking for Jews to move to Israel & take over Palestinian lands. And of course, the EU & US support this because Israel is an anchor state for maintaining neoliberal control of the Middle East.

Photo is an African refugee just released from Holot waiting with his belongings trying to figure out where the hell to go when he is unable to return to Tel Aviv or Eilat.

Support African refugees in the Israeli gulag by building the economic, cultural, & academic boycott of Israel. Immigration is a human right. Open the borders.