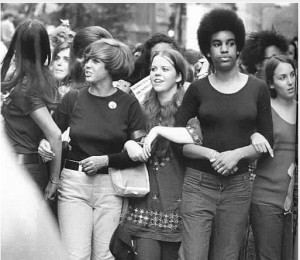 The Women’s Strike for Equality on August 26, 1970 in NYC was the first protest of the women’s liberation movement, now called the second wave of feminism. It was called on the day which marked the 50th anniversary of the 19th Amendment to the US Bill of Rights giving women the right to vote. The demands of the march were: Equal pay for equal work; Free 24-hour childcare; & Free abortion on demand, No forced sterilization. There had been many abortion actions for a few years but this was the first protest that proclaimed all of our demands.

There have been for a long while serious attacks on the women’s movement. Some belittle the movement because they have not sufficiently studied the history & have relied on media misrepresentations. From the very first emergence of feminism, media lied, distorted, vilified feminists. Some of the media lies & distortions include that the movement was white, middle-class, racist, “sex-negative,” homophobic, exclusionary, & pro-war. When the movement first began, media portrayed it as lesbians, man-haters, & spinsters too ugly to get a man.

Others deride the movement to support their opposition to identity politics–that is, because they resent when the oppressed stand up with independent power against their oppressor. Political power that is not controlled or shamed terrifies many people. A political analog is the vilification of Black Lives Matter.

Many just want to destroy feminism, however they can do that, because their hatred of women & women’s political & social power intimidates them. Now the feminist pioneers are belittled as TERFs & SWERFs & blue-nosed lily-white haters. That’s misogyny & ignorance talking–not the historic record. And what’s most offensive about it is that it completely eliminates Black, Latina, & lesbian women from the history of feminism–of which they were a central part.

For anyone who was part of that movement from the late 1960s to its decline in the mid-1970s, it was a glorious experience of women learning from each other about our oppression, of overcoming the competitive we were indoctrinated with toward each other, of standing together in a political anthem of defiance.

In 1970 I moved from Minneapolis to NYC to become part of the women’s movement & was publicity coordinator on the August 26th march. We were arrested twice, once while wallpapering the Playboy club with posters advertising the march.

These are two brief recordings of an interview done with me during an organizing meeting. It was a proud moment in my political life & I’m reposting on the 45th anniversary of that march which set off the women’s liberation movement.

Photo is front line of march.