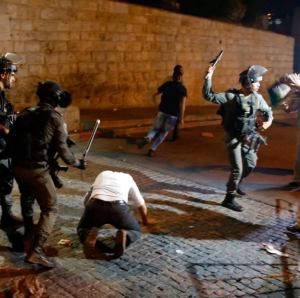 The media caption to this photo said Israeli troops “clashed” with Palestinians who in protest refused to enter the occupied Al Aqsa mosque compound & prayed outside in the streets.

We need to get terminology straight when it comes to occupation & military violence against unarmed worshippers & protesters & not be confused by the obfuscations of language. This is a brutal assault, not a “clash.” This is military occupation, not new security measures.

Our fullest solidarity with Palestinians. End the occupation. Self-determination for Palestine.

(Photo from The Independent)