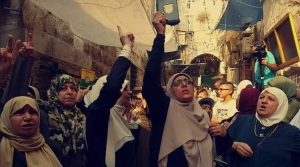 Palestinians are protesting Israel’s new so-called security measures at Al Aqsa mosque in occupied East Jerusalem. Although Israel has no rights of sovereignty over East Jerusalem & no rights to control or desecrate a Palestinian place of worship, they have armed troops patrolling within the compound & installed metal detectors at entrances & surveillance equipment as if Palestinians were the source of the violence. Israeli authorities claim three Palestinian gunmen smuggled weapons inside the mosque compound, necessitating the metal detectors, but if the surveillance cameras had been operating it would more likely have shown the summary execution of those three young men by Israeli troops.

Border police are deploying tear gas, stun grenades, water cannons against unarmed protesters. Seventeen-year-old Palestinian Mohammed Mahmoud Sharaf was shot in the neck & killed by an armed settler during these protests. Was the gunman arrested & hauled in for assault with a deadly weapon & for murder? Almost certainly not.

Palestinians refuse to go through the metal detectors not because they’re carrying concealed weapons but to protest Israel’s attempts to control the mosque compound. Instead they are holding prayer vigils in the streets outside the mosque. Israel long ago imposed age restrictions on men under 50 entering for prayer services so they are accustomed to praying in the streets.

Our fullest solidarity with Palestinians. Our condolences to the family of young Mohammed; may he Rest In Peace.

End the occupation. Self-determination for Palestine. Build the economic & cultural boycott of Israel (BDS). Buy nothing with barcode beginning 729.