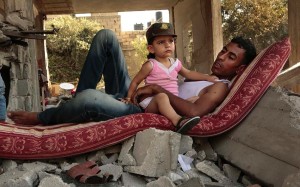 The truth of the matter is Palestinian parents must be worn out & frantic trying to protect their children from bombs, from being buried in cement rubble, from being embedded with flechette darts & DIME shrapnel. And then to have Israeli war propaganda & world media accuse them of using their beloved children as human shields for rocket launchers!

Beat the drums loudly for justice in Palestine. Stand with the parents & children of Gaza & answer hasbara with the truth.

This man & his little girl are resting in the rubble of their home in an area of Gaza which has seen some of the worst destruction. They will be among the hundreds of thousands left homeless.