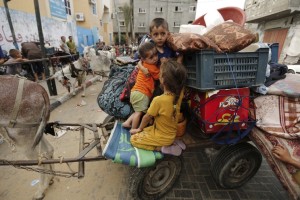 While Israel is taking a brief rest from slaughter, displaced Palestinians are traveling back to the rubble that once was home. These little kids who just went through a living hell are leaving a school serving as a UN refugee center in Beit Lahiya in northern Gaza, a few miles from the hills of Sderot where their suffering was a spectator sport. The brief respite allows those psychos to run home now to check the mail & feed the dog.

The UN reported Israel bombed six UN refugee centers & that eight UN staff member have been killed. They also report the shells hit the centers while children & infants slept next to their parents. And still the best Ban Ki-moon can come up with is a wimpy complaint to Israel & a “shame on you” to both Israel & Hamas. It isn’t that the UN isn’t on top of things; they have more access to information than the entire Twitter-sphere which sent hundreds of images of Palestinian children round the world–images which are shattering the edifice of Zionist propaganda & the romance of Exodus mythology. Nothing explains the deafening silence of the UN & its refusal to indict Israel for war crimes except collusion with Israel & it’s allies.

Many laud the actions of Latin American regimes who issued objections or recalled their ambassadors after nearly four weeks of ethnic cleansing. Admirable, but mighty insufficient when you consider the massive political power they could bring to bear on Israel & the US or the massive humanitarian aid they could mobilize if they were willing. Their ambassadors will be back in Israel shortly & the lucrative deals with Israel will not miss a beat. But at least they lent their moral authority (even though some like Brazil’s Dilma Rousseff have that in short supply) to the struggle of Palestinians–& that is something the solidarity movement needs to run with.

Israel & the US are rightly concerned about the impact of those images of Palestinian children– what Netan-psycho-yahu called “telegenically dead babies” & another Zionist pervert called “snuff with haloes”–& they’re trying to counter them with the deeply racist, dehumanizing claim (drawn from the cesspool of 19th century colonialism) that Palestinians use their children as human shields. They’re dragging out the biggest halfwits on the planet like Donny Deutsch, & the living dead like Jon Voight & former terrorist Oily Weasel, to cover Israel’s ass by vituperations against Hamas. And when they speak of “Hamas”, they really mean all Palestinians since for Hamas to use children as human shields, they would need parental collusion.

Israel has been riding high a long time on Exodus romance; it was propelled into this phase of Operation Ethnic Cleansing by irrepressible conflicts within it’s own society. The combination was deadly & when ethnic cleansing went into overkill, even those who couldn’t point to Israel on a map & don’t know Palestine from Tunisia stood aghast.

Rather than be daunted by the criminality, the solidarity movement must run with the truth. We need to pressure those Latin American regimes to increase pressure on Israel, we need to put the heat on the US & the stooges of the US Congress, we need to badger the UN, but mostly we need to organize massive protests, speak-outs, forums, teach-ins; we need to have Palestinians tour; & we need to evangelize for the economic boycott of Israeli products (barcode beginning 729). The source of our power is in truth & in our numbers. Just ask the Vietnamese.