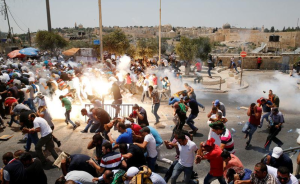 This is the scene yesterday in Ras Al-Amud, often described as “a Palestinian neighborhood in East Jerusalem.” That’s the language of occupation since all of East Jerusalem is supposed to be under Palestinian control but after Israel occupied it in 1967 it has been building & expanding Zionist settlements.

Palestinians are refusing to accept the new Israeli restrictions over Al Aqsa mosque & in protest are praying outside in the streets–something they are used to doing since Israel began a few years ago banning all men under 50 from praying in the mosque.

Yesterday, Palestinians were just finishing Friday prayers in Ras Al-Amud when Israeli police attacked them with stun grenades & tear gas. These unarmed worshippers are clearly running from an attack but that did not stop media from describing it as a “clash” with Israeli troops. Incidents like this took place all over East Jerusalem, sending nearly 400 Palestinians to the hospital with injuries from live ammo, rubber bullets, beatings, tear gas inhalation. Three Palestinians were killed: 17-year-old Mohammed Sharaf & 20-year-old Mohammed Abu Ghannam of gunshot wounds, & 18-year-old Mohammed Lafi. May they Rest In Peace.

Our fullest solidarity with Palestinians in their defense of Al Aqsa mosque & their right to religious freedom & worship. It is not a coincidence that the Indian army is creating the exact same havoc & violence at Jamia Masjid in Srinagar, Kashmir.