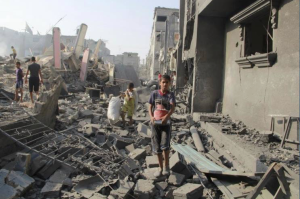 A friend sent me a video put out by the rightwing Zionist group StandWithUs. It’s of a cocky Israeli smart-aleck taunting the BDS movement by reciting all the technological inventions of Israel including Intel chips in computers, anti-virus programs, cell phone technology, the batteries in electric cars, generic medications. The arrogant message is we can’t live without Israeli invention. He forgot to mention Israel’s inventiveness in military weaponry which is very much involved in India’s murderous assault on Kashmir.

Being thick as you-know-what, he was unaware of his obvious appeal to the Jewish supremacism that Zionism is rooted in or its repugnant affinity & political association with white supremacism. He was too racist to know he can’t publicly say he “couldn’t find any Palestinian inventions.” That would be because so much of Palestinian culture was appropriated by Israeli settlers as their own heritage & this dipshit doesn’t know the difference. But mostly it’s because Palestinians are fighting an unarmed life & death struggle against Israeli colonialism & ethnic cleansing armed with the advanced technology of US militarism. Nothing for anyone to brag about here. There’s only shame.

It appears StandWithUS isn’t in the vanguard of public relations about Israel because many of them have been trying so hard by showing up at civil rights protests & through rabbi Michael Lerner (the guy who spoke at Mohammad Ali’s memorial) to disassociate from obvious racism & portray themselves as champions of justice. But for our building BDS, it’s good they’re too stupid & rabid to know that & instead choose to strut their arrogant supremacy.

This photo from Israel’s 2014 carpet bombing siege of Gaza is a young boy in Rafah, Gaza looking for belongings midst the rubble of his house. This is how Israel chooses to uses its vaunted technology.