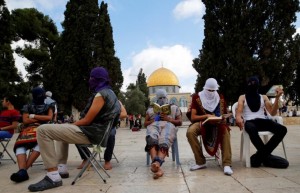 Many think the Israeli conflict with Palestinians is inscrutable, even intractable because media coverage is half-assed at best & lying-assed as a norm.

Reuters news service posted this caption, of the half-assed genre, along with this photo: “Masked Palestinians read the Koran before clashes with Israeli police erupted during the holy month of Ramadan near the Dome of the Rock (seen in background) on the compound known to Muslims as Noble Sanctuary & to Jews as Temple Mount in Jerusalem’s Old City June 28, 2016. An Israeli police spokesman said that the compound would be closed to visitors, including Jewish visitors, for three days in response to clashes, in which masked Palestinians threw stones at Israeli policemen and some 16 suspects were detained by the police.”

IBTimes posted a series of photos of the same event with reporting of the lying-assed genre: “Violence was witnessed at the holy site back in September. Since then, Palestinian’s have carried out dozens of attacks, including shootings & car ramming assaults, killing 32 Israelis & two visiting Americans. According to AP, 200 Palestinians have been killed during that time, most of which were identified as attackers by Israel.”

Let’s see if the truth can be told in not much more space than all those lies: This is the last ten days of the Muslim holy period of Ramadan. Thousands of worshippers from the West Bank bypassed the apartheid wall & tight security measures imposed by the Israeli military to get to prayer services at the Al-Aqsa Mosque. According to mosque officials, 250,000 Palestinians performed noon prayers on Friday despite Israeli restrictions excluding all males under the age of 45.

According to the director of the mosque, disturbances began on Sunday when Israeli police opened a gate to the Al-Aqsa compound to allow tourists & Israelis to enter the site–even though the agreement governing the mosque excludes non-Muslims from entering the mosque during Ramadan. It didn’t say how many they allowed to enter but in April of this year they pulled the same stunt & allowed over 1,000 to enter. If it isn’t a provocation to parade hundreds of hostile “tourists & Israelis” through the mosque during Ramadan while at the same time excluding Palestinian males from prayer, then what the hell is!?

Palestinians had every right to protest the presence of those provocateurs & of Israeli police–not just because it breached Al-Aqsa regulations but because it was an act of Israeli aggression intended to justify violence against Palestinians. Palestinian medical teams took seven Palestinians to the hospital for treatment of injuries from sponge-tipped bullets, tear gas, & beatings.

The best way to defend Palestinian religious freedom is to honor & build BDS, the economic, cultural, & academic boycott of Israel.