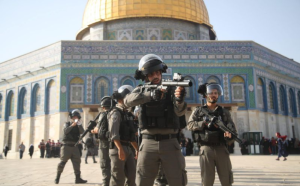 Continued occupation of Al Aqsa mosque compound: just hours after pulling out the metal detectors & surveillance cameras, this is what Palestinians faced when they returned to the mosque for Friday prayers today. Media said “clashes broke out” within the compound after several days of civil protests & violence from Palestinians & some pointed out that the form of protest was thousands of Palestinians praying every day outside the Noble Sanctuary.

They did not discuss how police & paramilitary forces have been attacking unarmed protesters engaged in prayer with tear gas, stun grenades, & water cannons all over East Jerusalem, not just outside the compound. They did not discuss the Palestinians killed nor the hundreds injured, including from gun shot wounds.

To post this photo with a headline “clashes broke out” is a mockery of journalism but that is exactly what media did. The Al Aqsa compound is a Muslim holy site & neither Jews nor Christians have any kind of claim to it historically or archaeologically that aren’t manufactured to justify colonialism. Pointing assault weapons & using tear gas & stun grenades on Palestinians who came to gather for Friday prayers is worse than a provocation; it is a desecration of a Palestinian sacred site, a denial of religious freedom, & the violent military occupation of the Noble Sanctuary.

Emergency protests in defense of Palestinians & Al Aqsa are more imperative than ever. The crisis is by no means over. This is a call to arms for all who believe in religious freedom, not just for those who believe in Palestinian self-determination.