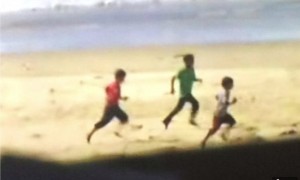 In what has to be the mother of all kangaroo courts, the Israeli military cleared its bombers of all criminal charges in missile strikes last summer that killed four small boys playing on the beach in Gaza. One media report says the IDF claims an Israeli gunboat thought they were targeting militants from the Hamas navy & that “the figures were not identified at any point during the incident as children.” Another report says the Israeli air force bombed believing the children were “gunmen” running in an area “utilized exclusively by militants.” They ought to be able to get the story straight. Were the kids killed by gunboats & by airstrikes?

The children were bombed playing soccer in the Gaza City harbor. So much for high-tech warfare & precision bombing when genocide is the agenda! And to think the IDF never once brought up the charge the Palestinian navy was using children as human shields.
To fend off the naughty finger from the UN, the Israeli military has been conducting internal investigations of 105 cases of alleged military misconduct during Operation Ethnic Cleansing last summer & cleared themselves of several charges including the bombings of a cafe, medical facility, & an entire residential area, along with allegations of abusing a Palestinian detainee.

This is where the testimony of IDF soldiers & veterans in the group Breaking the Silence is so powerful. In a report they issued last May they documented that the IDF directly targeted civilians in Gaza. While Israel makes the insane claim that their military is the most moral in the world, their own soldiers & veterans prove them to be engaged in genocide.

The entire Operation Ethnic Cleansing last summer was nothing but war crimes. The UN & International Criminal Court in the Hague can parse each individual incident for possible war crimes but Israel is indicted in the court of public opinion for its continuing blockade of Gaza & its repeated bombing assaults on a civilian population.
This is a twitter image of three of the boys running for shelter before being killed so we can judge for ourselves the immensity of Israeli war crimes.